Our Halloween concept was really born a year ago when Marissa came up with idea of having children come out Cauldrons only the bubbles coming out were rainbow.  I mean a rainbow Halloween? What’s not to love! Marissa took the concept to Kelsey and in true form Kelsey began sketching.  As with all things we plan, it evolved quickly.

We had three main area of color and fun, let’s start with the balloon wall. As Marissa said, this is where the idea began. we wanted the kids in different colors popping out of cauldrons and the bubbles to be rainbow balloons. We had each color go from light to dark to black. We garnished each set with Glam Fete tassels, tiny eye ball balloons inspired by the invitation and of course tiny Pearl and Jane bats. Robin of Bijiox Balloons was the master behind the entire creation. She even added balloons spilling out of each cauldron- genius. 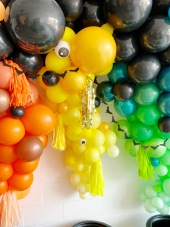 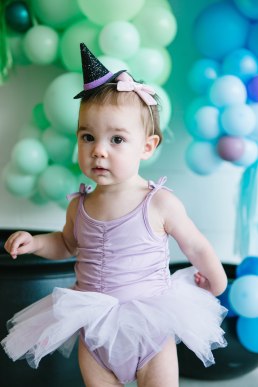 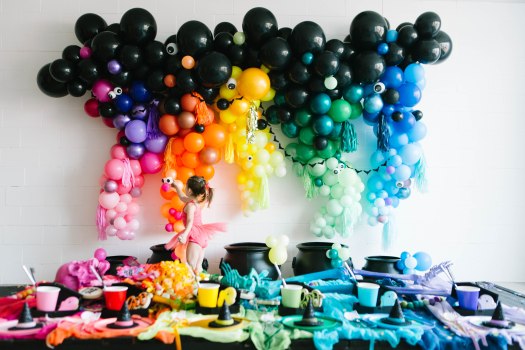 Have you me our girl Felecia? As avid pinterest girls, Marissa and I have seen lots of painted skeletons but we wanted to take it a step further. When it came to this shoot Marissa was the DIY queen and did all the painting, dying and more painting. She did the giant skeleton in an ombre rainbow and it couldn’t have turned out better. We used the tables that Marissa’s huband built, they are actually the same ones we used for the  4th and Back to School, just painted black to add a little bit of spooky. Nicole of Danville Cheese filled Felecia to the brim with every candy she could get her hands on, custom cookies and more candy. It was insane and the kids went sugar crazy over it. 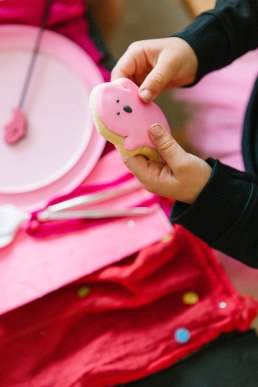 When we were planning the table setting (you know this is my favorite party) we wanted every place to be different. I did a similar concept for Denver’s Rainbow Christmas but I was so excited to take it a set further and use basically everything Oh Happy Day Party Shop had to offer. Each set was different the big plate, small, napkin etc. Marissa hand dyed cheese cloth to match each set and act as a table cloth. By doing this we decided to have all the kids sit on the same side of the table. This was not the original thought but now I can’t imagine it any other way. 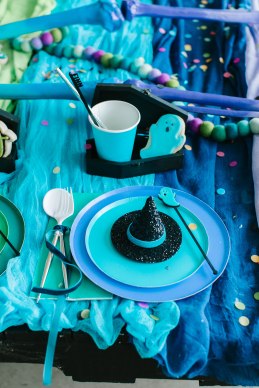 It’s really fun to finally have results and see what we come up with, we always have the obvious ideas but we always have the “what the hell are we going to do with that” thoughts too. prime example, what are the kids going to sit on. The pasts two shoots it has started as an afterthought and become on of my favorite parts of the shoot. For back to school the kids sat on stacks of vintage books, for this shoot, we came up with the idea of tuning one long bench into a giant witches broom for the kids to “ride”. When we then decided to incorporate the dried florals, we were instantly obsessed.

On the other side of the table Marissa adorned it with ALL of her rainbow pumpkins, which of course, she already owned. They were even more perfect than I had pictured.

We knew we needed some sort of bar area, something for cocktails and a cake. Well the ideas did not stop coming and we knew we needed something bigger. Marissa thrifted this vintage dresser, which will live in her dining room and painted it white. It was a really cool piece to work with because it had doors and drawers and different compartments we could work with. As we talked about styling the piece, we realized that between the two of us we owned a cake stand in every color of the rainbow. Boom- rainbow cake stands, done. We used my black mirror with tiny bats again the wall. It magically had the reflection of balloons in it and really set it off. Busy Bee Floral worked her magic and filled the entire dresser with rainbow dried florals. It looked like a piece at a high end wedding and I still cannot get over it. 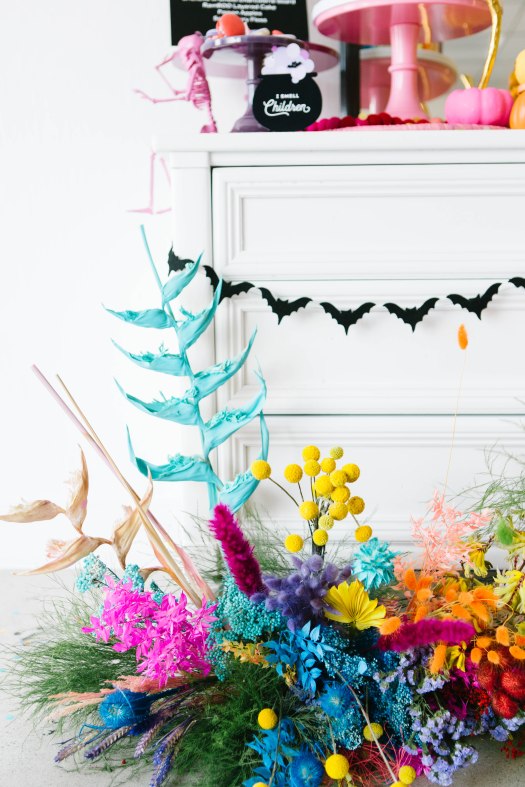 We added more Pearl and Jane garlands- because they are seriously magical and the BEST detail to everything. My personal favorite party was the custom SPOOKY sign by Against the Grain. We origally thought it would lean against the mirror but it wasn’t getting the attention it needed. We played with the drawers and it slid if perfectly, front and center.

Each cake stand had a little something different and spooky, light Gummy Worm Pale ale, bubble gum blowing skeleton cupcakes, and ghost cookies, but let’s about those CAKES. Yes, thats plural. We had to do something sweet and something savory for the adults. The sweet cake is a matter piece by Ines of Carmela’s Cake. When she showed up with this two layered beauty, we were in shock. We came to her wanting vertical rainbow ruffles and the results were off the charts. The artistry was immaculate. She even did rainbow layers on the inside. We added Fancy Free Finery felt bats with rainbow streamers and it was absolute perfection. 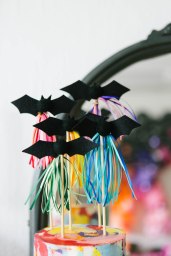 Now, that savory cake, by Nicole of Danville Cheese- was beyond our greatest expectaions. We asked for some brie, something dark and spooky and she showed up with a FOUR LAYER cake made of cheese, brie and honey comb. Perfectly garnished with fruits, figs and spooky spiders – this is what dreams are made of. You better believe we were sipping champagne and diving in to the cheese once the shoot was done!

We had to have the kids in color and something super special. We went to The Wishing Elephant to incorporate something of hers into the shoot. The kids wore TWE sweatshirts for Back to School and they were just perfect. She didn’t have anything coming that would match so she CREATED SOMETHING SPECIAL. We were shocked and honored with she decided to design something inspired by our concept. When she came back to us with this rainbow of ghosts, we were floored. Once we say this design, we literally changed all the details of the rest of the shoot. We passed her design to two of our other vendors to make sure the design went through out the entire party and not just on their shirts. We had Sugar Chic Designs create matching cookie to TWE ghosts and it was such a fun detail to work into the candy and have on the dresser, plus they were delicious. 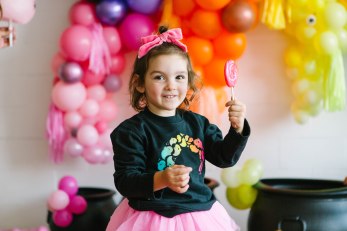 Jenny of Design and Unwind took Carolyn’s sweatshirt design and replicated her ghosts into multi color stir sticks. They adorned the place setting and the cocktails on the bar. Her menu that replicated the design was EPIC. Seeing the tiny ghosts done in acrylic was a showstopper. The perfect way to incorporate the design into other elements. 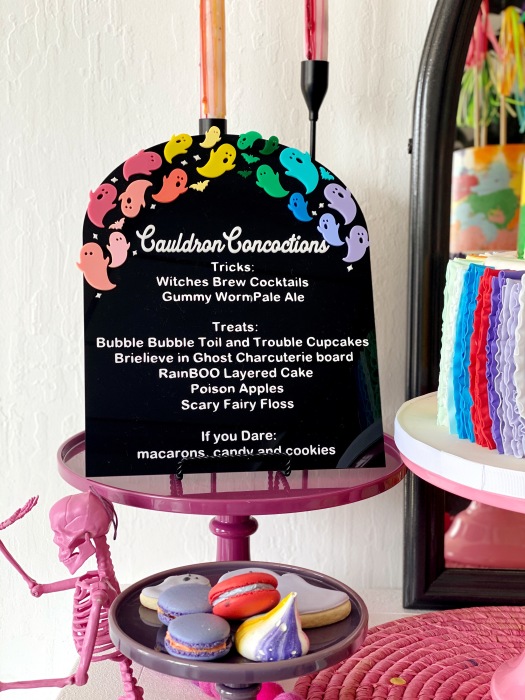 The kids wore their solid colors under the sweatshirts and it was TOO cute! P.S. how adorable are the girls tutus from Lamb and Cat? Match made in heaven. We lined up all the kids in color order at the table to indulge in the candy in their matching Wishing Elephant Sweatshirts. We absolutely love this design and are so thrilled she is selling it as a part of her Halloween collection! Get one while you can!

The kids also wore the most perfect witch hats custom made by Little Blue Olive, each velvet ribbon matched their plate and outfit- I CANNOT with these details.

Can we talk about the invitation? I think it’s my favorite part. This is an introduction to the shoot, a peek into what to expect and the entire concept on a piece of paper. Lindsay of Itsy Bitsy Parties had become my go to at every party and shoot. Her creativity and talent is out of this world and this expanding cauldron was beyond perfect. It was adorned with a tiny bat and eyeballs that inspired us to add eye balls to the balloon garland. The invite made our signature flatlay better than EVER.

Speaking of the flatlay, I added all our favorite elements that might go missed during the shoot. The pompom bat wand by Kiss you Co was so whimsical and different, we absolutely loved having it at the shoot! Of course, give us all the confetti. Every shoot, needs Studio Pep confetti, we were so honored that she custom mixed this rainbow and black with all the shimmer. We covered the floor, tables and flat lay in it and it was the perfect addition.

Nothing could have been possible with out Janea capturing every moment perfectly and her beautiful space. We LOVE, LOVE, LOVE working with her.

I am sure I missed some of the details but I hope the pictures speak louder than I do. We are contniually grateful, humbled and honored to be able to create these concepts and execute with such amazing vendors on our side!