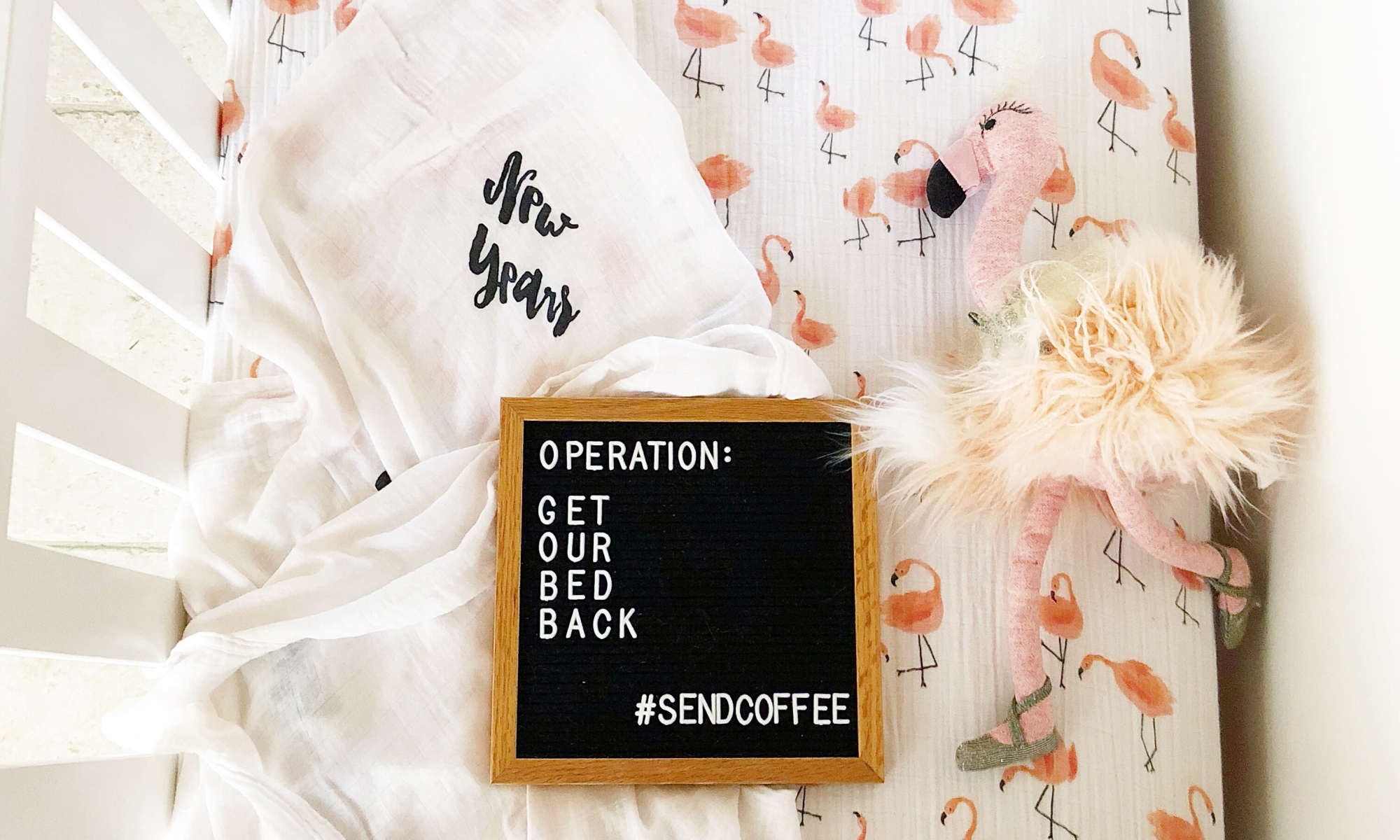 Toddler sleep regression, peanut butter sandwiches in bed, one kid waking up the other, no coffee… these are a few of my least favorite things. And this has been our reality for almost four months, and I’m officially over it.

Let me start by saying, Denver used to be the BEST sleeper, and we were really proud (and lucky). We moved her into her own crib at five days old and she slept through the night after one month. Fast forward to before the Hurricane- I could put her in her big girl bed, (which she moved to with no problem) at nap time and bed time, kiss her goodnight and be done. She would put her self to sleep, have four hour naps, and sleep all the way through the night. She would let us know she was awake and was happy as a peach when we came in her room to get her. Fast forward and add a hurricane- nothing is the same.

I couldn’t even tell you what kind of sleeper Ray was. She was sleeping in our room, in her pack and play up until the storm (she was one month old) and has been in our bed, next to me ever since.

When we were in the bunker and on our ‘refugee tour’ I really didn’t care how the girls slept, as long as they slept- so I could too. Coming to find out, the trick for Denver was simply a peanut butter sandwich and a movie of some sort. (She sucks on the PB like she’s nursing and it knocks her right out.) We were always sleeping in the same room if not the same bed, so I laid with both of them until they were asleep at night. Naps hardly happened, if they did it was on the couch; of course, with a sandwich.

When we arrived back home, after two months of no break, sleeping in crumbs and a serious caffeine addiction- I was ready to go back to regularly scheduled programming. My goal was to get rid of TV and food in the bed, have D back on her own and deal with Ray once Denver was in a routine.

Putting D down now requires laying next to her reading books until she falls asleep, which is no problem, although that sleep doesn’t last long. Naps are cut to about an hour, and a couple hours into the night D walks out of her room and into ours to join, Danny, myself and Ray. Some nights she lays quietly and goes back to sleep; others she’s fights the covers and cries until we cave and go get her something to eat, or if it’s been hours, let her watch an episode of Curious George. By this time all four of us are up, awesome.

Last night I was ready to kick them out, thinking putting Ray in the crib would be the tough part, boy was I wrong. Ray was a CHAMP. She went down in her crib, bathed and full around 730, Denver followed her an hour later also bathed and full with no issue. We had two sleeping girls in their respective beds! Woo hoo! (Now how long will this last?)

Ray woke up around 1130, so I went in, fed her for about 10min and put her back down. 130am Denver comes into our room, and falls back asleep. Ray, up again around 2am, quick feeding and back to sleep. When I came back in Denver had stolen my spot, I move her and she freaks out. So from 230-430am D was up crying, couldn’t take her to their shared room, because she would wake Ray, we tried a snack, a show. The only thing that did it was laying on top of me in pure exhaustion. As soon as she fell asleep, Ray was up. So I went into their room and Ray and I finished the evening in Denver’s twin bed. 630am Ray was up and I needed coffee injected into my veins.

What I learned, Ray is easy, she can sleep anywhere, whenever she’s tired, so, I have to wait to move her. Denver is the one who has to have her routine back and we can’t force it with Ray in the same room. My plan for tonight is to have Ray with me, and lock D in, let her cry it out and soothe her self, I think that’s the only way. It will be more tough nights, but I think she’ll get the hang of it and hopefully go back to sleeping though the night. In the meantime, send coffee, good vibes and advice!